Funerals during the Covid-19 period have been exceptionally brutal! It is bad enough that a LOT of people died and many people suddenly lost their elderly family members, but it is just inhumane to ban the friends and relatives from saying their Good-byes.

During the peak times of Covid-19 only 10 people were allowed to attend a funeral. It is crazy that that rule was put out there and even worse that it was enforced (there is a good chance that there is NO law about it, but that is only a recommendation, but I didn’t check this out) by the churches and funeral locations.

Imagine a HUGE church where 2m distance is no problem even if 50 people are in it and after that a HUGE cemetery where even 10m distance would be no problem, but only 10 people are allowed. Total nonsense and in Ireland we have to thank the NPHET (National Public Health Emergency Team) for that brutal and unjustifiable rule!

On 29 June, in Phase 3 of the getting-back-to-normally plan, this 10 people limit had been removed, but a 2m physical distance rule is still in place.

In Northern Ireland the limitation were similar and for funerals the limits are depending on the size of the indoor venue and at the graveside a clear limit of 30 people is described on www.nidirect.gov.uk/articles/coronavirus-covid-19-regulations-guidance-and-what-they-mean-you and a screen shot, taken on 03 July is included below. 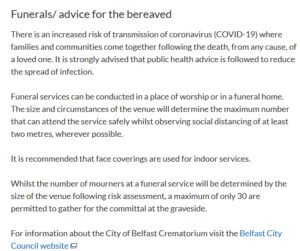 Also, there is a physical distance requirement of 2m.

This is also described in the interim guidance notes for funeral directors from 02 July 2020 at www.health-ni.gov.uk/sites/default/files/publications/health/interim-guidance-for-funeral-directors.pdf

“It is permissible for funeral services to be conducted in a place of worship or in a funeral home. The size and circumstances of the venue will determine the maximum number that can attend the service safely whilst observing social distancing of at least 2 metres, wherever possible. It is recommended that Funeral Directors liaise with the relevant officiant, clergy or venue manager to determine the maximum number that can be accommodated at the venue. This information should be communicated to the bereaved family when making the normal funeral arrangements.”

“Whilst the number of mourners at a funeral service will be determined by the size of the venue following risk assessment, a maximum of only 30 are permitted to gather for the committal at the graveside or at the front of the City of Belfast Crematorium.”

I want to repeat that I think some aspects of all these rules are arbitrary and don’t make sense and I am not defending the rules in the slightest. But they are the rules made by the authorities and the rules are VERY VERY clear. Now, you would think that maybe you and me have a slightly more liberal interpretation of these rules or might even break some occasionally, but the people that make the rules, i.e. the people in power, should – nonsensical or not – stick to them STRICTLY.

But then a Sinn Fein member dies in Northern Ireland, where Sinn Fein is in the power sharing government with the Unionists with Arlene Foster as First Minister and Sinn Féin’s Michelle O’Neill as deputy first minister.

That same Michelle O’Neill went to the funeral of the Sinn Fein member and got in a LOT of hot water – deservedly! Because the Deputy First Minister of Northern Ireland decided to ignore the rules her “Northern Ireland Executive” made the rest of the country stick to.

O’Neill claims that she did not break any rules, but have a look at the pictures that emerged here www.rte.ie/news/ireland/2020/0701/1150731-northern-ireland/ 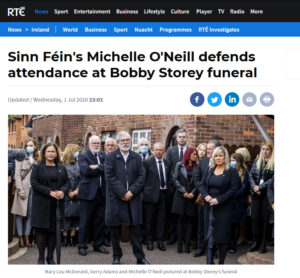 2m distance? Not a chance!
And it gets better! The same article on RTE.ie shows a picture of the graveside where a max of 30 people is allowed: 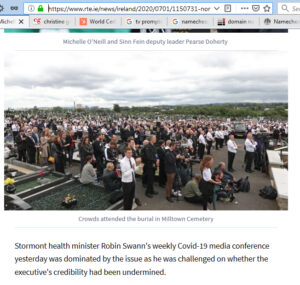 We can definitely see that O’Neill’s assurance

Corona Virus, ElsewhereDo as I say not as I do, Funeral, Michelle O'Neill, Northern Ireland, Sinn Fein

Yesterday morning (08 Dec 2017) it was agreed that there should not be a Hard Border between Ireland and Northern Ireland after Brexit. Nobody has a clue yet how to achieve that because it looks as if this either means that Northern Ireland has to partially leave the UK OR that the UK will NOT leave the Single Market and the EU Customs Union despite their eagerness to do so. Nevertheless, the declaration was made and everyone on either side celebrates it as a big achievement (Theresa May, the EU, Leo Varadkar and the DUP in NI) even if nothing is clear until further negotiations will take place.

Brexit: No hard border to Northern Ireland – Is that really possible?

I am well aware that the population of Northern Ireland is divided on their allegiances and many would prefer a closer relationship or even a “re-unification” with Ireland, I am also aware that nobody would want to get back to the situation before the “Good Friday Agreement” from 1998, when terrorist organisations on both sides and highly questionable official forces made life hell for everybody.
But being from a border area elsewhere, I also am well aware that a border or even border controls is not the biggest problem in the world. Sure, we would all prefer a borderless world, but we have on one hand no problem causing a huge amount of in-humane problems to non-EU citizens who want to visit us in the EU, but on the other hand, many think that a border between Ireland and Northern Ireland would be the worst possible scenario.

I don’t agree that borders are a problem. When I grew up we regularly went to France, which was only 20 minutes away and it was never a big problem. Two countries, two set of laws and rules and a border made some sense. The EU states worked hard to break down the borders, but if one state decides to leave, I can’t see how it will work not to have borders again.

Nevertheless, it was announced on Friday that after long negotiations it was agreed that there will be NO hard borders between Northern Ireland and Ireland. So no border controls! But nobody seems to know yet how that will work in reality.

Have a look at the agreed document here. It says nothing and leaves a lot to Phase 2 negotiations and at the same time the agreement says a lot. Clause 49, for example, more or less implies that Northern Ireland might stay in the EU Customs Union and in the Single Market. And Clause 50 promises that there won’t be any barriers between Northern Ireland and the UK, but this is then probably only possible if the UK also stays in the EU Customs Union and the Single Market. :-O

Either that agreement is not worth the paper it is printed on OR the UK just has abandoned Brexit in large parts. Odd!!

It is just a few more days until Britain will declare its departure from the European Union. A totally nonsensical move in my eyes, but (happily!?) mislead by some populist politicians like Nigel Farage and too arrogant to consider that it could all end in a disaster, the British old people and (uneducated?) lower class is forcing Britain to take its hat in March 2019 and say Goodbye to the EU.

Some people in Ireland think that without Britain in the EU, Ireland will be in trouble, others hate the EUR for a variety of reasons and others again don’t care much about the EU and the opportunities that it should provide to Irish businesses because they put (nearly) ALL their focus on selling their goods to Britain and ignoring the 25 other markets in the EU.

Nobody knows what the outcome will be. It will probably take another 10 years until we do know and by then, many of the people who caused Britain’s exit will not be around anymore. :-O

Apart from the economic impact, there is one question causing distress in Ireland and it is a surprising issue: It is the question about the border to Northern Ireland.

I am well aware of the historic circumstances, the 800+ years of occupation of Ireland, the Anglo-Irish Treaty from 1921 and the “Troubles”, which were a lot more than just “troubles”, but no matter what your political preferences are you have to accept that by international law, Northern Ireland is part of Britain and NOT part of Ireland. You might want to change that and that wish/goal/preference is absolutely legitimate, But any change needs to follow formal procedures until it becomes reality.

With that in mind, I can understand why people in Ireland don’t WANT to have a border again between the Republic of Ireland and Northern Ireland, but I can’t see a single reason why there shouldn’t be a border once Britain leaves the European Union and as long as Northern Ireland remains part of Britain.

The area I come from in Germany was for a while French, then German, then French again and it is German for a long time but only about 20 minutes by car from the French border. The same happened – in reverse – to the area close to the border in the French side. German, then French, then German and now French. The change in “ownership” always happened through occupation. Both parts were separated by a border until the European Union tore down borders through the Schengen Agreement. But if Germany or France left the European Union, it would be totally normal and understandable that a border with check points etc would be re-built.

Why should the situation be difference between Ireland and Northern Ireland?

Yes, I get it, some think that Northern Ireland SHOULD be or OUGHT to be part of Ireland, but that is as wrong as if you think your neighbours house SHOULD be yours. It will be yours once you agree to it OR the courts decide that your neighbour took the house from you illegally and has to give it back. But until that formal process is completed, it is owned by someone else.