Odd behaviour of Ryanair passengers? Are they all beginners?

I haven’t used Ryanair for a while. Not because I have a problem with the company, but because they decided to stop flying to where I would like to go in Germany, so I had to go back using Aer Lingus. But this week I flew to Italy and Rome Ciampino was the most suitable airport to fly to. Ryanair flies there and the prices were ok, so we were in business.

Last time I flew with Ryanair they didn’t have any seat allocation yet, but it was a first come, first served approach when you get into the plane. That has changed now and you get seats allocated or (for a surcharge) can select them yourself. The consequence of this is that EVERY single person entering that plane knows exactly that there is a seat waiting for them and they know exactly where this seat is. 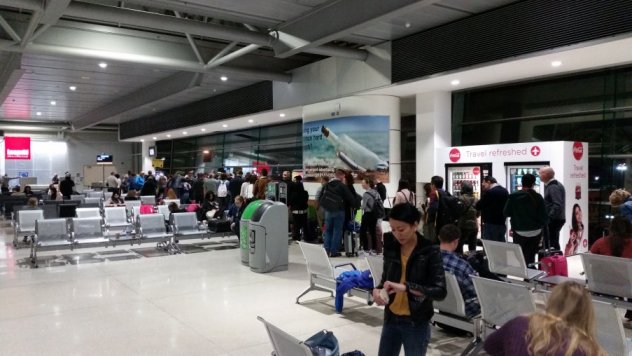 So can anybody explain the scenario in this picture to me? Why do approximately 150 people jump up from their seat as if someone has put needles under their backside as soon as boarding of this plane is even hinted?

Everybody has a seat assigned, so what do you gain by standing there for 10 minutes before the hinted boarding actually starts? Why do people still jump up as if it was a first come, first served seat allocation?

Is it just the space for the hand luggage that gets them to be mad impatient? We got on board as one of the last ones and there was still space for hand luggage.

Human beings are the most irrational species it seems! ;-)