The Corona Virus is continuing its rampage!

At the time of writing this, there have been 271,620 infections with 87,363 recovered. And sadly 11,280 people have died. That is more than 57 (!!) Ryanair plane loads full of people and imagine how shocked we would be if only ONE plane crashed.

Risk Group or Not: Prevent!

So in actual numbers it is terrifying and a lot of us have started to feel quite anxious or at least concerned about the impact that the virus could have on our own life. It is still the case that the majority of fatalities are in an older age group and/or with people that have some underlying illnesses, but there are plenty of young people that have heart issues or asthma or other circulatory problems that could be badly affected.

If you are in a higher risk group, stay away from other people and wash your hands really well when you have touched items outside in areas where potentially infected people have been and don’t touch your face until you have washed the hands.

With these steps, you will drastically reduce the risk! You will not have to wear a mask, but if you feel safer with a mask or a scarf, then wear it. Fear and anxiety is a bad thing and it doesn’t make sense to suffer it just because you don’t want to be seen with a mask.

If you are super healthy and could have a guarantee that there are no health issues that could require you to be put on a ventilator, it would be best for you and for society as a whole to get infected asap, then completely isolate until the symptoms are totally gone and afterwards be safe from the virus AND not have the risk of being a carrier anymore. Unfortunately, though there is no such 100% guarantee.

There is very good news about immunity: Research on monkeys has shown that immunity will be achieved after an initial infection and once immunity has been achieved, then the monkey who is a second time exposed to the virus will also not pass it on to others anymore. But this research has only been done on a small test group of monkeys and we don’t know either if us human beings react exactly the same as monkeys.

So to protect the risk groups, the concept of “social distancing” has been developed. The name is very unfortunate, it should be physical distancing or spatial separation, because we don’t want to move away socially from our friends, colleagues and families. But for the rest of this post I will still – reluctantly – use the bad term.

The idea behind social distancing is perfectly expressed in the graph below by @garrywarshaw. 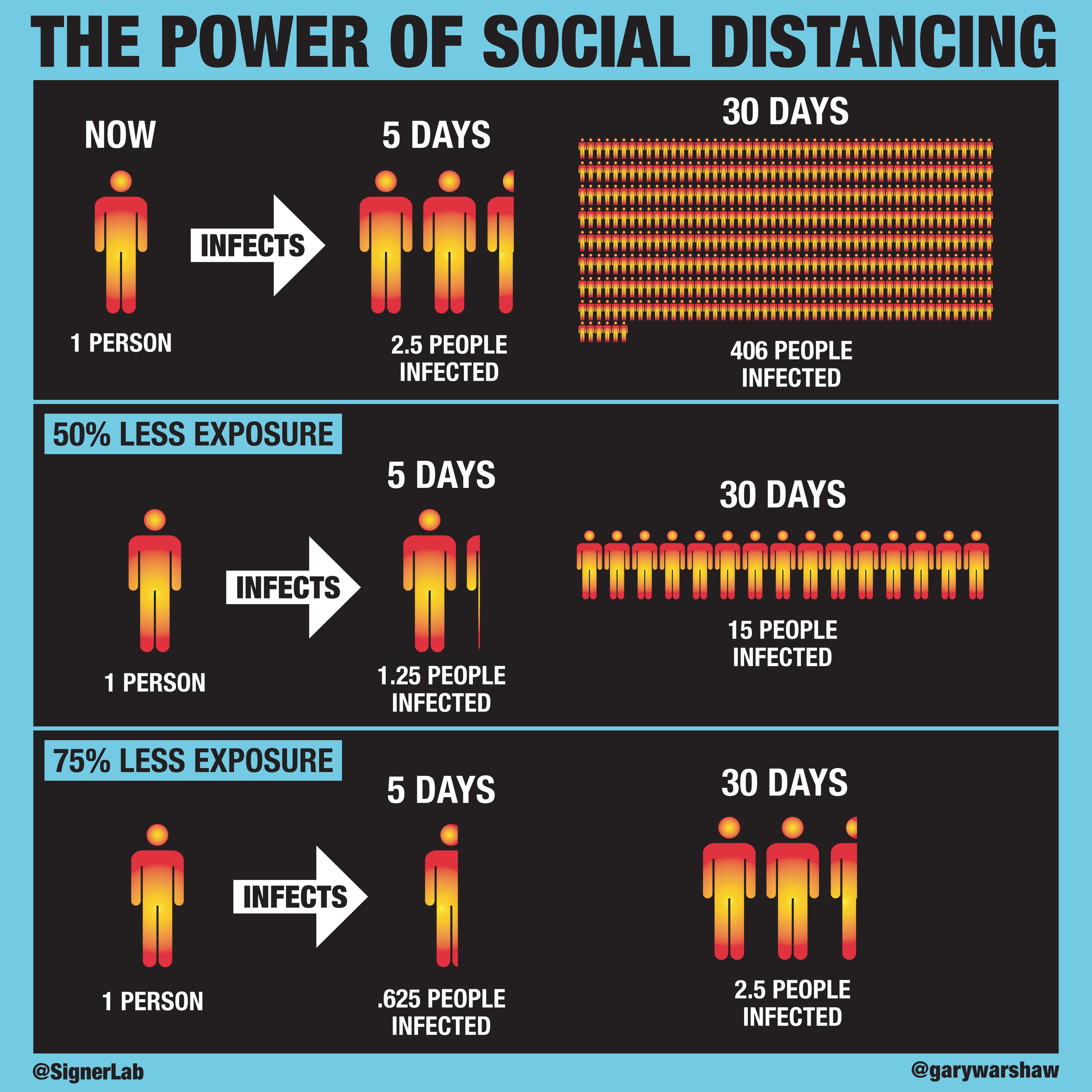 By infecting less people initially, even the multiplication (or compound) effect of an infection chain a significant reduction of total number of infections can be achieved. This is the one and only reason for social distancing.

It does SLOW DOWN the spread of the virus. Social Distancing doesn’t stop it and it also doesn’t stop that we might get infected eventually. But a calculation by a university in the UK showed that just protecting the elderly (for example by locking them away) would not be enough. There would still be 8 times more hospital beds required than they have available.

With a drastic slow down on the other hand, the cases that need to be admitted to hospital will be looked after correctly. A lot of us will still have to get infected to achieve a immunisation (herd immunity) of a larger group of people. So our attitude to an infection has to change! Nobody wants to have a 2 week long bad flu wth the risk of a hospital stay and a low – but still higher than zero – risk of death, but if we accept that it is NOT the worst case scenario if we get infected.

The person will most likely survive; has helped society to reach herd immunity faster and does not pose a risk once the two weeks of symptoms are over.

So please stop stigmatising people who got infected by the virus and stop panicking over the possibility that you might get it.

Will we have a lock down?

Nobody wants a lock down really. A lock down means that nobody is allowed to leave the house or apartment anymore unless it is to go to work, to buy food or to go to a doctor.

A lock down is NOT needed where people stick to the social distancing rules. But where people don’t adhere these rules, the only other way to ensure that they stay away from each other is to force them to stay inside.

I saw some pictures from Spain, where a cyclist was fined for going on a training cycle on his own. Yes, he broke the existing law and that is what he was fined for. But the law that he broke didn’t help to improve the Corona virus situation in the slightest. He was NO danger to himself or anyone. In Bavaria in Germany where a moderate lock down is implemented from today, the rules have been created better: You are still allowed to go for a walk as long as it is on your own or only with the people that live with you.

I can understand why the Spanish government used their all-encompassing law, it is MUCH easier to control than a more differentiated law. But this whole situation could take quite some time and rules only make sense if they help improving the situation.

So what can we do in Ireland to avoid a lock down? Simple! Adhere to the Social Distancing rules!!

When will it all be over?

This is one of the most difficult questions to answer. Virologists think that in about 2-3 months it could be over…at least for now. The problem is that when winter returns, the virus could come back.

There is another possible scenario and that assumes that the limitations or restrictions to life are less severe (e.g. schools will restart for higher classes at some point and work will resume) in that case, the restrictions could be lifted then applied again, then lifted and applied again. Whenever the virus comes back the infections will be allowed to rise and then will be controlled through the application of restrictions again. In this on-off scenario, the whole Corona / Covid-19 issue could go on for around 2 years. :-O

I heard about faster tests and a vaccine. Is that true?

Yes and no! Faster tests are being developed at the moment. They will probably be very similar to a pregnancy test where you pee on a strip that tells you instantly through a colour change if you have the virus or not. This is not as easy as it sounds because it has to have a high reliability. But research is on the right path and will probably have a solution relatively soon. Then tests will have to start, which will take another bit. Until then we only have the relatively cumbersome lab test that checks the presence of the virus in a throat swab and – as far as I know – that also can detect antibodies as indicators that you had been infected.

A vaccine is also not too far away from being developed. But even when scientists found a vaccine, that doesn’t mean that you will be able to get it. Currently vaccines needs to go through a very long and expensive trial process, which could delay the availability for patients for another 12-18 months based on current regulatory rules. But maybe the rules will have to get changed so that at least health professionals can be vaccinated earlier. But there is a risk of severe side effects and politicians have to decide if they want to accept this risk (and insure the vaccination producer against it).

What should I do for now?

Three things:
1) Stay upbeat and positive by creating a new routine during the isolated living
2) Adhere to all Social Distancing rules and if necessary, obey the lock down.
3) Keep in close contact with people that live on their own, with elderly people and with anybody else who could do with your support. Isolation is a challenge for most people and we need to be there for each other to get through it. Be proactive with your friend. Don’t wait for them to tell you they need help, but contact them regularly to check if they need anything.