The Corona Files: It wasn’t me, says the Pangolin!

09 May 2020Written by Joerg Steegmueller 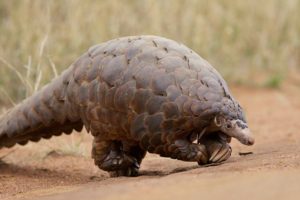 One of the most asked questions about the Coronavirus is where it came from and there are a number of theories that have various degrees of plausibility. One of them is really interesting because it introduces something new.

One of the theories is the official Chinese series of events, the other one is the one that the CIA has now adopted and that Trump will use to put penalty taxes on Chinese goods again and then there is the third one, an interesting one that thinks a little outside the box.

The Chinese Version that the communist party of China peddled as the official story from the beginning talks about a Coronavirus that came from a horseshoe bat (their face looks a little like a horseshoe). From that bat, the virus jumped to an intermediate animal and the Chinese said it was a Pangolin and from there it was transferred to humans in a wet market in Wuhan where Pangolin meat was sold. Apart from bats, Pangolins are the only mammals reported to date that have been found to be infected with a coronavirus that is related to Sars-Cov-2.

The problem with this story is that no virus was isolated from the wet market in Wuhan, instead the Chinese authorities destroyed all evidence as quickly as possible and refused to let any external (or internal) experts to check the evidence before they closed the market and disinfected it. This is like going to a murder scene with barrels of bleach before you let the crime scene investigator have a look.

But the presence of the “Wuhan Institute of Virology” that explicitly was researching the Coronaviruses in the same city where the first recorded Coronavirus case was discovered raises huge suspicions and many, including US President Trump and the CIA, are certain that the virus came from this institute and either was “freed” intentionally or accidentally. The institute particularly researched into the possibility of bat to human transfer without an intermediate host. The head of the Coronavirus research at the institute, Shi Zhengli, was talking about Coronaviruses and this possible direct transfer not too long ago and in addition one of the researchers from the “Wuhan Institute of Virology”, Huang Yan Ling, who some think might have been Patient Zero, has disappeared since the start of the pandemic. She could have died and her name was removed from the Institute’s website.

Here is a story that appeared in the Scientific American about what happened regarding the virus outbreak and the Institute: www.scientificamerican.com/article/how-chinas-bat-woman-hunted-down-viruses-from-sars-to-the-new-coronavirus1/

It outlines that the genomic sequence of the virus that was found in the first patients didn’t match the sequences of the viruses Shi Zhengli’s team had sampled from bat caves. But at the same time, it was confirmed that the SARS-CoV-2 virus was 96% identical to that of a coronavirus the researchers had found in horseshoe bats in Yunnan.

But oddly Yunnan about 1800km away from Wuhan! So how did this virus make it from the Yunann province to Wuhan without causing the same havoc as it caused in the city of Wuhan or the province of Hubei?

Nobody seemingly has a good answer! Maybe it was a traveling Pangolin?? :-O

Why is the Pangolin in this story?

The intermediary host is not absolutely required, it could be possible that the virus from the bat directly went to human beings. But bats and human beings are quite different and this virus was particularly “prepared” to transmit fast between human beings, so virologists think that it had to adjust to mammals that are closer to us before it could be so infectious. The poor Pangolin gets the blame, because the SARS-CoV-2 virus was found in some Pangolins, but they might not at all have been the intermediary.

Was the virus man-made?

A number of virologists who have analysed the genomic sequence have excluded that possibility. They said there are certain unusual features in the genomic sequence that would be odd for man-made viruses and they are therefore convinced that it was a natural transmission. But everything is still possible. We just don’t know enough yet.

An argument for the man-made nature was the spike protein that can be found in the virus. It was said that that HAS to be man-made, but in the meantime that spike protein concept was found in natural viruses., which reduced the small probability further.

What other intermediary host is possible?

If it wasn’t the Pangolin, another intermediary host could have been the environment in which the SARS-CoV-2 virus got ready for its damage in humans and it is possible that over a few weeks or months it jumped a number of times between the host animal and human beings to fine tune the mechanism, so to speak. A suitable animal would be either a pig OR a dog or cat, because they are a) living close to us and b) are genetically closer to us than Pangolins.

And one specific animal that could have been involved is a Racoon Dog that is bred in China for its fur and the biggest breeding location is Wuhan! :-O The Racoon Dog and the dog keepers/breeders could have swapped the the virus a few times giving the virus time to adjust to human beings, before it then started spreading between human beings.

Here is an outline of the Racoon Dog theory www.tagesspiegel.de/wissen/raetsel-um-herkunft-des-coronavirus-stammt-das-virus-aus-dem-marderhund/25775352.html (in German)

What do we know?

We know the virus is from bats. We know it made it to human beings and we know that it either was transferred directly or via a host animal.
We also know that the Chinese authorities were anything else but upfront and honest. We know that they wanted to suppress information and do not want to take any blame.
But we also know that the CIA is highly untrustworthy and has an agenda in all actions and that Trump would very much appreciate a new reason to harass China with.

Interestingly the Australian and the British secret services do not agree with the CIA’s story about the Wuhan Institute of Virology as the source of the SARS-CoV-2 virus. They seem to think that the USA is as motivated to change the truth as China is.

We also know that virologists are scientists and are not necessarily experts in Secret Service politics and also do not necessarily know everything about how a virus could have been made to look like it has been made by nature instead of being man-made.

Where does that leave us?

It leaves us very much in the dark! We know we can’t trust nobody and we know that we can’t find out ourselves.

The racoon dog option would be a nice explanation, but it is just grasping for straws. I could easily see some sort of accidental escape of the virus from the Institute of Virology as plausible, but what do I know!

One thing concerns me and it is in this context NOT Bill Gates or 5G or Anthony Fauci! The Chinese government and the communist party who is the government got under a lot of pressure towards the end of last year due to the protests in Hongkong and we know from the situation in East Germany that totalitarian governments have to be VERY afraid of civil unrest. So shutting that protest down and at the same time increasing the control of their own people would be extremely convenient for the Chinese government.

The introduction of the tracing app that became mandatory in China to enter public buildings and shops and even public transport is a brilliant tool to totally control their citizens and could not have been introduced for ANY other reason without some opposition. The RAPID introduction in a very efficient way despite the massive size of the country and the huge data and processing requirements could indicate that a LOT was prepared and ready to go. The relative regional limitation of the virus epidemic also is a little odd when you compare it to what happened in other countries.

So if you want to believe a scenario whereby the virus was intentionally used to cause havoc to introduce severe population control mechanism, you can find heaps of plausible indicators for this theory.

Either way, it seems that the Pangolin is definitely innocent!

[The title photo is from the Flickr stream of David Brossard shared under Creative Commons licensing: creativecommons.org/licenses/by-sa/2.0/]